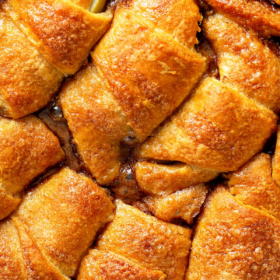 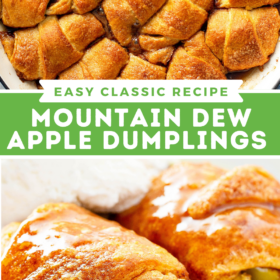 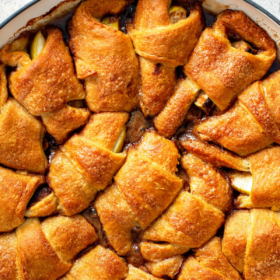 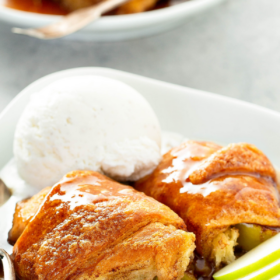 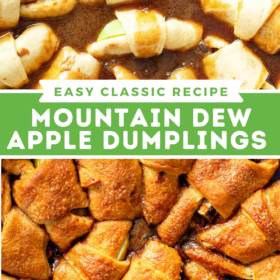 Crisp green apples are wrapped in soft dumplings and baked in a sweet cinnamon sauce, made with brown sugar and Mountain Dew. These Mountain Dew Apple Dumplings are the most comforting homemade pastry ever!

Today we have one throwback of an apple dumpling recipe – all the way back to the 2000’s, to be exact! This Mountain Dew Apple Dumplings recipe is an absolute family favorite that has withstood the test of time. I still get excited to make these homemade dumplings even though I’ve done it about a million times at this point!

You would never guess that these pillow-soft crescent roll dumplings, made with a delicious cinnamon-brown-sugar sauce, contain fizzy Mountain Dew of all ingredients! I definitely didn’t, anyway, before this “secret ingredient” was revealed to me by my mom.

Since this apple pastry recipe has been passed down to me, it’s become one of the desserts that I most look forward to making all year. You can bake them any time of year, of course (and I do!), but I really love enjoying them in the fall because then I can use my own freshly picked apples. These dumplings, just like your favorite apple pie recipe, always taste better when you’ve gone to the trouble of hand-picking your own apples. :)

In summary, these tender, apple-filled dumplings in sugary sweet cinnamon sauce are totally irresistible, so my advice to you is this: Don’t resist and enjoy!

Why I Love This Recipe

Brown sugar. No, tart Granny Smith apples. Wait, but there’s also cinnamon. Okay, so, as you can see, there are many reasons as to why I love these apple dumplings. I’ll narrow it down to a few though, because we’ve got dumplings to make:

Alright, let’s get into the details of these apple dumplings! The ingredient list is pretty short today – you’ll only need to round up 7 essentials:

Why Use Mountain Dew?

Mountain Dew has a somewhat citrus-y flavor, which tastes great in the cinnamon-brown-sugar sauce and pairs nicely with the tart yet sweet apples. It’s not mandatory to use it, there are other substitutions you can make, but in my opinion it really is the secret ingredient that brings this dish together!

How to Make these Apple Dumplings

You won’t believe how easy it is to whip up this indulgent treat. That quality is a bit of a double-edged sword – I wouldn’t be making these every week, if you catch my drift – but you deserve to treat yourself every now and again!

Prep the Apples and the Dumplings: Core and slice apples into 8 even slices (16 slices total) and then peel the skin off the apples. Sprinkle cinnamon (about 1 tablespoon) on top of all of the apples. Then roll one apple slice inside of each crescent roll piece. Place in the prepared pan, in two rows, leaving a little room between each dumpling.

Make the Cinnamon Sauce: Then in a small pot bring the butter, remaining 1 tablespoon cinnamon, granulated sugar and brown sugar to a boil. Once boiling, evenly pour over the crescent rolls.

Bake the Dumplings: Bake for 40 to 45 minutes, until bubbling and the dumplings are browned on top.

And that’s the process! There’s nothing like a homey apple dumpling recipe to get you in the mood for fall, or just to satisfy those comfort food cravings.

Before you begin, though, here are a couple of tips that might come in handy as you make your apple dumplings:

It is absolutely a must to serve these apple dumplings with vanilla ice cream. It’s all part of this essential dessert experience! If you wanted to substitute ice cream for some whipped cream though, or do both together, that would also be acceptable.

A healthy drizzle of the leftover sauce from the pan is a good idea, too. Then, just sit back and watch everything disappear!

How to Store and Reheat Extras

The best way to store these apple dumplings is in an airtight container in the fridge, for 3-4 days. As far as reheating goes, you can use the microwave, or line a baking sheet and bake the dumplings at 350 degrees F until they are warmed through, and the dough is just a touch crispy.

If you’re a big fan of easy apple dessert recipes, try out the following!