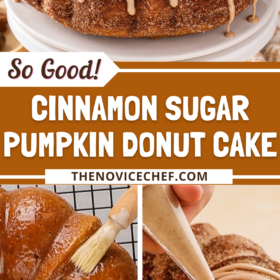 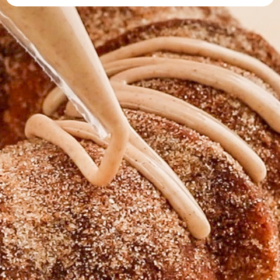 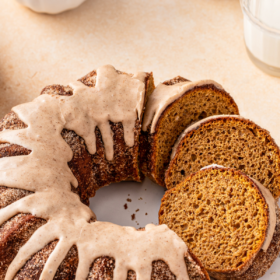 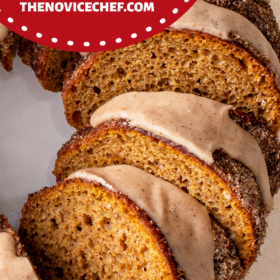 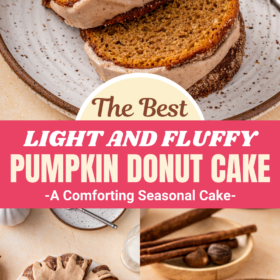 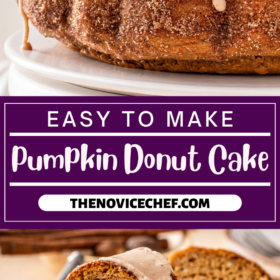 This Pumpkin Donut Cake is a delightfully moist, airy cake packed with fall flavors. With a dusting of cinnamon sugar and a maple cinnamon glaze, it’s perfect for your Thanksgiving dessert table!

That’s what this cinnamon-spiced donut cake is all about. Using a Bundt pan, we’re taking a cakey donut treat and making it bigger, better, and more pumpkin-y than ever.

But if that all sounds like a lot of work, let me tell you right now: this is one of the easiest recipes ever. All you need are a boxed cake mix and a few pantry staples to make it. No special equipment is needed. A mixing bowl or two, a whisk, and your trusty Bundt pan will do the trick.

The base for this cake is actually a boxed cake mix, which means that making the batter is really easy. It cuts down on the measuring and mixing a lot, and practically guarantees a light, moist cake.

For the Cinnamon Sugar Topping

For the Maple Cinnamon Glaze

What Is the Difference Between Pumpkin Puree and Pumpkin Pie Filling?

This is a very common question, and it’s extra important because cans of pumpkin puree and pumpkin pie filling can look so similar. The difference between the two is that pumpkin pie filing (AKA pumpkin pie mix) doesn’t just include pumpkin. It also includes dairy, sweeteners, stabilizers, spices, and other ingredients. For this recipe, you just want plain pumpkin, so check the label and make sure that’s all it contains!

How to Make This Pumpkin Donut Cake

One of my favorite things about this cake, and others like it, is the easiness of decorating! This unfussy cake doesn’t need to cool for hours before you finish it up and serve it – but it still looks absolutely gorgeous on the plate.

Every recipe is a little better when you have some inside info, so I’m happy to share these handy tips for success. Each one will help guarantee an easy, yummy dessert. Enjoy!

What else can you do with this recipe? Glad you asked! Fun variations are a big part of baking. Here are a few to try with this donut cake:

How to Store Pumpkin Donut Cake

Store this cake at room temperature, in an airtight container such as a cake stand with a fitted lid. It will keep for about 5 days.

Yes, you can freeze this cake – it should keep well in the freezer for 2 – 3 months. To make sure it stays fresh, cool it down completely before wrapping it and freezing it. Make sure you wrap it tightly in a couple of layers of plastic wrap, followed by a layer of foil, to seal out the dry air from your freezer.

For the Cinnamon Sugar Topping

For the Maple Cinnamon Glaze

Storage: Store this cake at room temperature, in an airtight container such as a cake stand with a fitted lid. It will keep for about 5 days.