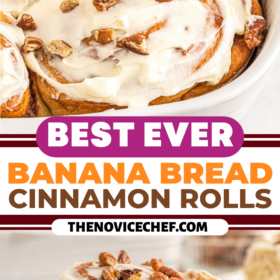 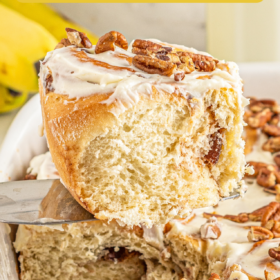 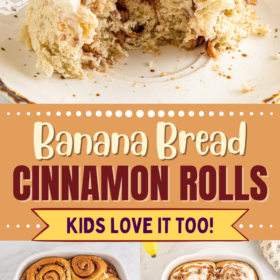 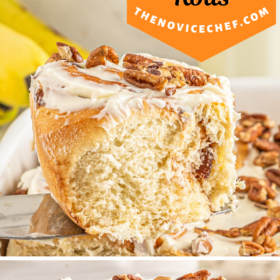 Soft, fluffy, and buttery, these indulgent Banana Bread Cinnamon Rolls are frosted with cream cheese frosting and sprinkled with chopped pecans. They make a scrumptious breakfast or snack!

There are two easy bakes that are always guaranteed to be a hit at my house: banana muffins, and cinnamon rolls. Anytime one of these beloved recipes makes it into the oven, you can bet that the family will be excited about that! This is why I did the obvious – and delicious – and combined the two into this one flavor-packed recipe.

Even if you’ve never made cinnamon rolls before, you can easily make this simple recipe. It sounds a lot harder than it is! A simple, sweet yeast dough gets extra flavor and moisture from mashed banana, while the filling is amped up with chopped pecans and a little nutmeg. Two rises and a quick bake give the rolls all the soft, fluffy, stretchy, goodness you could ask for. If you’re looking for the ultimate holiday or birthday breakfast, this is it!

If you love bananas as much as I do, you have to check out these other popular banana recipes: Brown Sugar Banana Bread, Best Banana Cake and my mom’s recipe for Easy Banana Pudding!

This recipe contains three parts: the dough, the filling, and the cream cheese frosting. For each part of the recipe, you’ll need a short list of basic baking ingredients.

What Is the Best Flour to Use for Cinnamon Rolls?

You can use either all-purpose flour or bread flour to make cinnamon rolls. Either is fine! Some bakers swear by bread flour for a better rise and bake when using yeast. If you do use bread flour, you may want to add a tablespoon or two of extra liquid to keep the dough soft and slightly tacky.

For gluten-free baking, you’ll want to carefully select a gluten-free 1:1 flour and add xanthan gum or other ingredients to give it enough stretch and elasticity for two rises. That can be tricky, depending on your flour and dietary needs, and you may want to check with the flour company’s customer service for specifics.

When you’re getting ready to make these banana bread cinnamon rolls, keep in mind that you need time not only for baking, but for the dough to rise twice. Depending on your kitchen’s temperature and humidity, these rise times will vary – I usually recommend budgeting an hour for the first rise and half an hour or so for the second rise.

Fill and Cut the Rolls

Should Cinnamon Rolls Be Touching Before Baking?

That’s a matter of taste. You can place the cinnamon rolls close enough together that they touch once they’ve risen, or you can try to space them out (you may need two baking pans) so that they don’t touch. The benefit of having the sides touching is that the rolls will have soft, pull-apart edges. Cinnamon rolls that are baked not touching will have more golden-brown, firm edges.

But wait, there’s more! More tips for the perfect cinnamon rolls, that is. Check out these helpful hints, and enjoy your soft, cozy batch of banana bread cinnamon rolls.

How to Store and Reheat Banana Bread Cinnamon Rolls

Cinnamon rolls may be stored in an airtight container for up to 3 days. Because of the cream cheese icing, they should be stored in the fridge for safety.

To reheat, you can bake the rolls again at 350°F until heated through, or give them a quick microwave.

Can I Freeze These?

Yes, you can. Cool the baked cinnamon rolls down, wrap in plastic wrap, and then store in a freezer bag. Freeze for up to 2 months. Thaw before reheating.