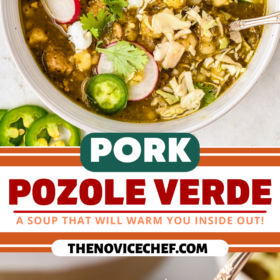 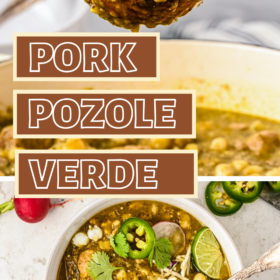 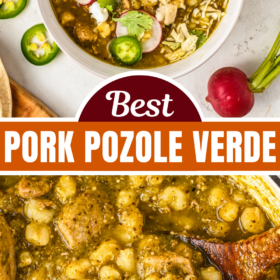 Packed with pork and white hominy, Pozole Verde is a comfortingly spicy Mexican soup. Made with a poblano and tomatillos sauce, a bit of shredded cabbage is just what it needs for extra greenness and crunch.

Spicy and vibrant, pork pozole verde is a Mexican soup with prehispanic origins. With juicy pork slowly simmered in chicken broth and a charred green sauce, it’s no wonder it was made as an offering to Aztec gods.

Smokey, spicy, and slightly sweet, this soup becomes extra flavorful the longer it’s simmered. Having said that, don’t be afraid to leave it in the pot a little longer! For a quicker cooking time, use cheats like frozen poblanos and rotisserie chicken.

With a signature greenness that isn’t going away any day, it’s time to get creative with the toppings. Sliced radishes and cilantro are the most common, but why not crumble some chicharron on top? Once you figure out your favorite combination, you’ll be simmering pots of pork pozole verde more often than you’d expect!

Pozole is a typical Mexican soup made with pork and white hominy. It’s typically only made for special occasions like Independence Day.

Although the flavor base changes depending on the region, it doesn’t necessarily have to be spicy. In fact, pozole can be quite mild if you leave out some or all of the chiles.

Simmered for hours until the meat is fork-tender, it’s a comforting soup with hints of cumin and Mexican oregano for spice and herbiness. The longer it’s cooked, the more stew-like it becomes as the broth thickens.

Often served in large bowls with lots of shredded cabbage, sliced radish, and red onion on top, it’s one of Mexico’s most iconic dishes.

What Are The 3 Types of Pozole?

Pozole comes in three flavors or types: green, white, and red— just like the Mexican flag!

Green pozole gets its color from poblano peppers, tomatillos, and jalapeños. Red pozole gets it from dried chiles, while white pozole is a plain broth with lots of aromatics for flavor.

What Kind of Pork is Pozole Made Of?

Pozole is typically made with pork shoulder or butt.

What Meat Was Originally Used in Pozole?

Believe it or not, the Aztecs used human flesh to make pozole. When the Spanish arrived to Mexico, it was substituted for pork and chicken.

You can find these ingredients in the Mexican/Latino section at most supermarkets. Check the recipe card at the bottom of the post for exact ingredient amounts.

For the Pozole Verde

Can I Make This With Chicken Instead of Pork?

Absolutely! Chicken pozole is very common, so just substitute it in the recipe.

How to Make Pork Pozole Verde

In a nutshell, making pozole consists of three main steps: searing the pork, making the sauce, and letting the soup simmer.

Add some extra flavor and cut down on cooking time with these simple tips:

What To Serve with Pozole

Pork pozole verde is so filling it doesn’t need lots of side dishes. However, a bit of guacamole and refried beans go great with the soup to tone down the heat.

Dunking Mexican bolillos and tortillas into the broth for an extra hearty bite is quite typical as well.

How to Store & Reheat Leftovers

Refrigerate any leftovers in an airtight container for up to 5 days.

Reheat it by microwaving the pozole for 1-2 minutes or until warm. You can also heat it in a small pot over medium heat.

Sure! Place any cooled pozole verde in a freezer-friendly container and freeze for up to 3 months.

When ready to eat, transfer it to the fridge overnight so it begins to thaw and then heat it as usual.