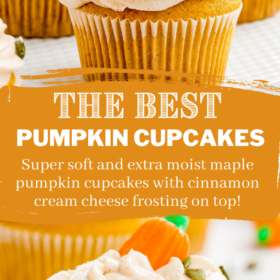 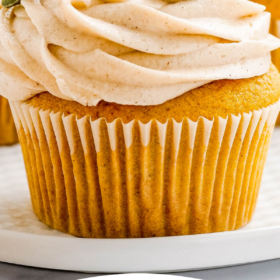 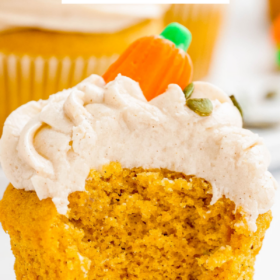 Super soft and moist Maple Pumpkin Cupcakes with warm spices and hints of maple are topped with a sweet cinnamon cream cheese frosting! All the best parts of Fall served up in cupcake form!

These Maple Pumpkin Cupcakes are based off of my incredibly delicious pumpkin layer cake. I divided the cake recipe down to a third of what it was originally, and halved the frosting. The result was 10 perfect cupcakes!

After that, I added some maple flavor to this pumpkin cake masterpiece and–combined with the sugary sweet cinnamon cream cheese frosting–it’s safe to say that the best parts of fall can be found in this cupcake.

The base of this cupcake is a soft moist pumpkin cake with warm spices and a light hint of maple. The cream cheese frosting is light, sweet and fluffy with hint of cinnamon and maple throughout! You won’t go wrong with these prefect pumpkin cupcakes!

You can use pumpkin pie spice (also sometimes shortened to Pumpkin Spice) or you can use cinnamon in this recipe. Either way will give you delicious pumpkin cupcakes!

If you do not have Pumpkin Spice, but would like to make it, below is a simple recipe you can whip up with spices at home:

Gather up these ingredients to get started:

For the Pumpkin Cupcakes:

For the Cinnamon Cream Cheese Frosting:

How to Make Pumpkin Cupcakes

How to Make Cream Cheese Frosting

Here are some tips to help you frost your cupcakes:

How to Make Ahead and Store Pumpkin Cupcakes

You can totally make these cupcakes ahead of time if you want. After they’re done baking, let them cool and then store them in an airtight container in the fridge.

The frosting can also be made ahead of time, and you’ll want to store that in the fridge too. I would suggest that you put this dessert together within 2 days… if you can wait that long!

Tips for the Best Pumpkin Cupcakes

These Maple Pumpkin Cupcakes are a Fall favorite that we make every single year. It’s an easy recipe to whip up and the results are well worth the time spent!

Super soft and moist pumpkin cupcakes with warm spices and hints of maple are topped with a sweet cinnamon cream cheese frosting… Good luck only eating one!

recipe note: I used imitation maple syrup extract because the flavor is 20X the flavor in a teaspoon of maple syrup. Yes you can use Pure Maple Syrup instead, however it won't add any maple flavor in the end product.