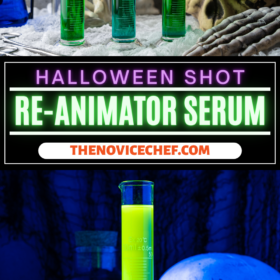 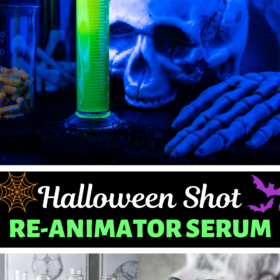 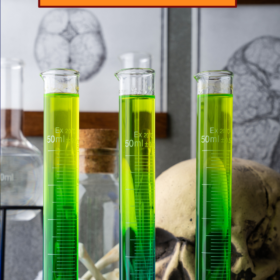 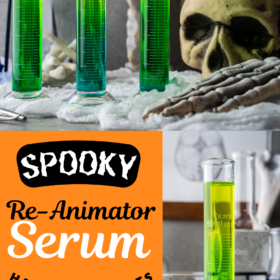 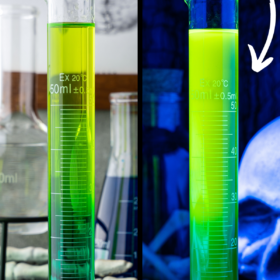 This Re-Animator Serum is the perfect Halloween shot! It’s fun, festive, and a great party trick. It’s made with banana rum, blue curaçao, and a secret ingredient that makes it glow under a black light!

A Spooky Layered Cocktail – That Glows!

I’ve crafted this glowing (and incredibly tasty!) Halloween drink that will blow your mind. It’s inspired by the cult classic Re-Animator. Have you seen it?! The movie features a serum that glows, just like this one. We’ll skip right past the spookiness of the film and just pretend to be a mad scientist/bartender mixing up tricky and tasty treats!

The Re-Animator Serum has deliciously smooth banana rum, sweet blue curacao, and a secret added touch that makes it glow when you put in under a black light!

The secret ingredient is Riboflavin, and we’ll talk more about that later. But for now, it’s time to break out the fun Halloween props and set yourself up for a night of fun. These Halloween shots are going to be the talk of the party!

This shot only requires three ingredients! Here’s what you need:

Here’s a little bit of information about this vitamin and, surprisingly, secret ingredient in this Halloween shooter.

Riboflavin is one of the B vitamins, B-2 to be exact. But, what does that mean? Vitamin B-2 is found naturally in a lot of foods that we eat on a regular basis. Some of these foods include milk, eggs, yogurt, spinach, and almonds.

It’s also available as a supplement in capsule form, and that’s what we will use here. Interestingly enough, when you dissolve the supplement into liquid, then that liquid glows in a black light. This is mindblowing and really cool. Science is fun! (Even for adults!)

How to Make Re-Animator Serum Shots

Let’s get started! Here are the instructions for making this super fun shot!

First, you’ll pour the blue curacao from a measuring glass into a tall graduated cylinder. It’s important that you don’t rinse out the measuring glass!

Add half of the banana rum. Next, pour the banana rum into that same measuring glass. It’s going to get a little bit of the leftover blue color from the blue curacao.

Open up one of the Riboflavin capsules and get ready to pour a tiny amount of the powder into the cup.

Sprinkle the powder into the measuring cup. Then, you’re going to take a very small amount of the powder and pour it into the banana rum. Now, watch it turn green!

Pour the banana rum into the graduated cylinder. Go slow and don’t rush it! This is how you build the layers of color.

Pour the rest of the banana rum into the measuring cup. Then, add some more powdered Riboflavin into the rum. Swirl it around and watch it turn yellow.

Pour the next layer of color into the graduated cylinder. Remember to go really slow. It helps to hold the cylinder on the side.

Finally, turn on the black light! Now you can watch your Re-Animator Serum glow under the light. It’s so cool! Then, of course, enjoy it…because it’s also really delicious.

Here are a few tips to follow while making the shot:

Where can I find graduated cylinders?

I found mine in the Halloween section at Michael’s craft store. However, they are sold abundantly online. The graduated cylinders found at Michael’s are great for drinkware but remember, they are for show! Don’t depend on the measurements on the sides. They are likely incorrect! If you can’t find graduated cylinders near you, and would prefer not to shop online, a 3-ounce double shot glass will work, in a pinch. However, the color gradation will be less noticeable. If making these for a party, I highly recommend using some cheap plastic test tubes!

Is it safe to drink Riboflavin?

Yes! Just one of the Riboflavin capsules will make at least 50 of these shots. That said, Riboflavin is considered extremely safe, even in high doses. This is because what’s not used by the body is expelled through the urinary tract.

Does Riboflavin affect the taste?

The amount of Riboflavin we add to this shot is extremely small and does not affect the flavor. Though it will taste bitter n large amounts.

Will this drink glow in the dark without a black light?

No. Riboflavin fluoresces, which means that it needs the energy from a UV light/black light in order to get its molecules up and jumping. If you don’t have a black light already, I recommend these black light bars. They worked great for our last halloween party.

Are you ready to have some fun?! Here are some fun ideas for serving this glowing drink!

Test Tubes: You can absolutely use regular shot glasses, but I think these fun test tubes really dress up these halloween shots. I used graduated cylinders for these photos, but they could get expensive for a party. If you are having a lot of people, I recommend looking at something like these plastic test tubes with lids instead. You get a lot more for your money and they are plastic!