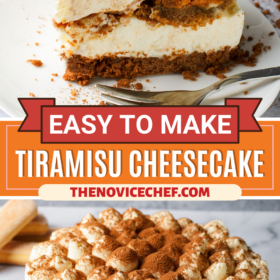 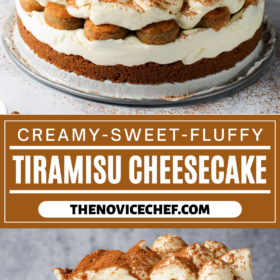 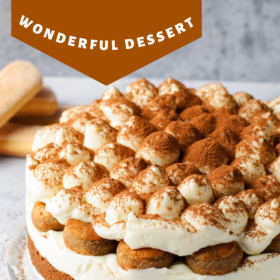 This rich and creamy Tiramisu Cheesecake is a super easy, no-bake recipe! It combines the best of two beloved desserts: Italian tiramisu, with its bold coffee and mascarpone flavors, and sweet, tangy cheesecake.

Sweet and Creamy Cheesecake, With a Tiramisu Twist!

One of my very favorite desserts is tiramisu. The first time I tasted this iconic chilled dessert, with its layers of coffee-dipped ladyfingers and sweet mascarpone cream, I was hooked! There’s a reason this sweet treat, lightly dusted with cocoa powder, is such a famous recipe: it’s practically irresistible.

Another dessert that no one can resist? Cheesecake. From a plain and simple version, to extra-rich New York style, to the unlimited fancy variations out there, cheesecake is always a winner!

So it really just makes sense to combine these two into one epic treat: a sumptuous, luscious, utterly indulgent no-bake Tiramisu Cheesecake. I’m going the no-bake route to cut down on the time and effort involved in making this dish. No-bake cheesecake is perfectly smooth, creamy, and rich, without the hassle of baking a traditional cheesecake batter in the oven.

What Does Tiramisu Mean?

Tiramisu literally means “pick me up,” or “cheer me up,” which makes total sense! With its triple-whammy flavor of coffee, creamy mascarpone, and cocoa powder, this recipe is guaranteed to make you feel better. Sometimes, a touch of alcohol or liqueur is added, such as Marsala wine, rum, or Kahlua, making it even more of a treat!

So what will you need to make this easy cheesecake version of tiramisu? Actually, it’s a pretty straightforward list! You’ll need two kinds of cookies, some cream cheese and mascarpone, and a few other pantry staples. Here’s the complete list:

How to Make Tiramisu Cheesecake

Assembling this dessert is simple, but there are a few steps involved, so it’s a good idea to read through them once or twice and make sure you have everything you need, before you start making your tiramisu cheesecake. Here are the steps, in detail:

My favorite tips for making this recipe in your own kitchen involve using the right coffee, the right temperatures, and the right serving technique.

You can do a lot with tiramisu, and cheesecake is also a versatile recipe – so feel free to tweak this combination dessert. Make changes that work for you! Here are a couple of examples for inspiration:

How to Store Leftover Cheesecake

Refrigerate your leftover tiramisu to keep it fresh, sturdy, and safe to eat. Stored in an airtight container, it will keep for up to 5 days.

Can I Freeze This Recipe?

Yes, you can also freeze this! After the cheesecake is fully set, wrap it in a layer of plastic wrap, followed by a layer of foil. Freeze for up to 3 months. Thaw in the refrigerator before serving.

Storage: Refrigerate your leftover tiramisu to keep it fresh, sturdy, and safe to eat. Stored in an airtight container, it will keep for up to 5 days.