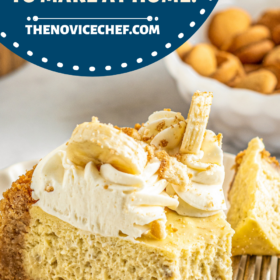 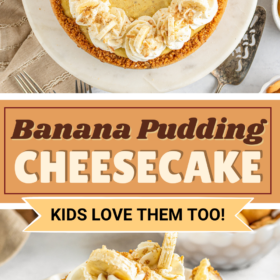 This Banana Pudding Cheesecake takes two of the best desserts in the world – pudding and cheesecake – and combines them into one creamy dish. It’s bursting with banana flavor, has a crunchy vanilla wafer crust, and is topped with fluffy swirls of whipped frosting.

A Banana Cheesecake to Rule Them All

Instead of a traditional graham cracker crust, this cheesecake uses vanilla wafers, which perfectly complement the bananas. The crunch of the thick wafers and the smoothness of the pudding is an irresistible combination. Plus, this banana pudding cheesecake is easy to make … you’ll probably find yourself turning to it over and over again!

If you like this recipe then check out some of my other cheesecakes, like my Pumpkin Cheesecake with Gingersnap Crust and my Oreo Cheesecake Cookie Cups.

Scroll to the recipe card at the bottom of the page for the exact quantities for all the ingredients.

Why Use Sour Cream?

The sour cream in the cheesecake might not be the most conventional ingredient, but it works really well. Not only is sour cream rich and decadent, but it has a lot of acidity. The acidity really enhances the flavor of the cream cheese. If you don’t want to use sour cream, you can substitute with plain or Greek yogurt.

This pudding cheesecake recipe has a lot of steps, but trust me when I say that it is worth it!

Prep. Preheat the oven to 350F, then use parchment paper to line the bottom and sides of a 9” springform cake pan. Spray the pan with baking spray.

Mix the crust. In a bowl, mix Nilla wafer crumbs, granulated sugar, and brown sugar. Stir in melted butter until the consistency is similar to wet sand.

Make the crust. Press the crust mixture into the bottom and sides of the cake pan, then bake it for 12 minutes. When it’s done baking, remove and let it cool on a wire rack.

Crank up the oven. Increase the oven temperature to 400F.

Make the cheesecake base. Put cream cheese and sugar in a stand mixer bowl with the paddle attachment. Beat on high for 2 minutes until the mixture is smooth.

Add the flavorings. Put mashed banana, sour cream, heavy cream, lemon juice, vanilla, and salt in with the cream cheese mixture. Beat it in until everything is mixed together, about 30 to 45 seconds. Add the eggs and mix in.

Make a water bath. Wrap the bottom and sides of the cake pan with aluminum foil, and place it in a baking pan or broiler pan. Add 1 inch of warm or hot water to the pan.

Cool and chill. Remove the cheesecake, take off the tin foil, and place the cake on a cooling rack. Let it fully cool, then place in the fridge for a minimum of 8 hours.

Beat the cream cheese. Place cream cheese, powdered sugar, vanilla, and salt in the bowl of a stand mixer with a paddle attachment. Beat until soft peaks have formed, about 2 minutes.

Whip the cream. In a separate stand mixer bowl, whip the heavy cream on high until stiff peaks have formed, about 3 or 4 minutes.

Make the topping. Add the cream cheese mixture to the whipped cream and fold it in with a rubber spatula. Put the topping in a piping bag.

Frost the cheesecake. Remove the banana pudding cheesecake from the springform cake pan, and pipe the frosting in swirls around the top edge.

Garnish. Sprinkle the top of the cheesecake with vanilla wafer cookie pieces and banana slices, then serve.

Here are a few tricks and tips to make sure that this mouth-watering dessert comes out perfectly every time you make it.

How Long Does Banana Pudding Cheesecake Last in the Fridge?

This cheesecake recipe will last for 5 days in an airtight container in the fridge. If possible, store it without toppings, as the bananas will brown in the fridge, and the wafers will get a little soggy.

Yes! Wrap the banana pudding cheesecake in two layers of saran wrap, then freeze for up to 3 months. Thaw in the fridge before eating.

For the Cheesecake Filling