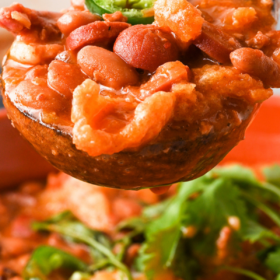 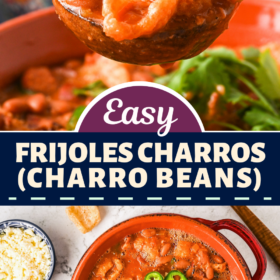 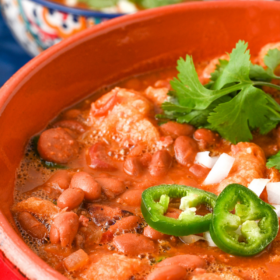 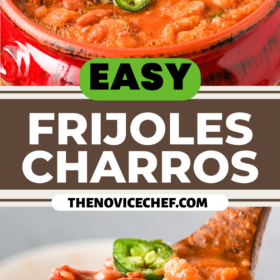 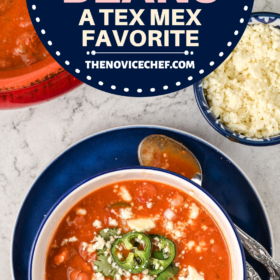 Just like Mexican cowboys used to cook them, Frijoles Charros are a hearty bean soup made with leftover meats. Chorizo, bacon, ham, and chicharron pack all the smokiness you need.

First invented by Mexican cowboys, frijoles charros were a simple improvised meal that turned out way better than expected and eventually became a national dish. They’re so hearty and comforting that you’d never expect them to be made from leftovers!

With a couple of cheats like canned beans, turning your kitchen into a Mexican restaurant has never been easier. Just make sure the beans are cooked right; everything else is adding ingredients to the pot at the right time.

Made with chorizo, ham, bacon, hot dogs, and chicharrón, it’s packed with enough protein to be a meal of its own. Served in a wonderfully rich and smoky broth, you’ll be licking the bowl clean like you’ve found your lost cattle.

What Are Frijoles Charros?

Frijoles charros are a typical Mexican dish that consists of bean soup flavored with bits of leftover meats. Chorizo, ham, bacon, hot dogs, and chicharron come together for this hearty soup, adding lovely smokiness and depth.

Simmered with lots of tomatoes, onion, jalapeño, and garlic, it’s a melting pot for Mexican flavors. The tomatoes add sweetness while the jalapeños bring heat. Meanwhile, the onion and garlic balance everything out with their pungent spiciness.

It’s often served with cilantro for a bit of herby freshness and queso fresco for richness.

Why Are They Called Charro Beans?

Frijoles charros get their name from “charros,” Mexican cowboys. This is because they used to spend most of their time outdoors— in the desert or the ranch— and barely had time to cook. Not to mention, few ingredients were available because of where they worked.

As a result, charros threw together improvised meals all the time using whatever they had on hand. Charro beans were the result of one of these unintentional lunches. That’s why they’re called “frijoles charros.”

What’s the Difference Between Charro and Refried Beans?

Charro beans are practically bean soup. The beans are whole and boiled in a flavorsome broth with bacon, hot dogs, ham, and chicharrón. They need to be served hot and can be a whole meal.

Refried beans are mashed or blended beans cooked in lard and thickened. They don’t normally have meat in them, except for chorizo sometimes. They are served cold, room temperature, or hot as a side dish.

What Does Charro Mean in Spanish?

Traditional charros are Mexican cowboys. They dress in tight-fitting, beautifully embroidered suits and ride around in horses. They also look after livestock. It’s an art form, a sport, and a job.

However, one can argue there’s a newer kind of charro nowadays, transforming the meaning into something musical, like mariachis.

Charro beans are an excellent way to use leftovers to make a hearty meal. For exact ingredient amounts scroll to the recipe card at the bottom of this post.

How to Make Frijoles Charros

Don’t let this hearty bean soup intimidate you. It’s just a bunch of leftovers thrown into the pot at different stages.

Tips for the Best Charro Beans

If you follow these tips, there’s no going wrong with the recipe.

Frijoles charros are filling enough to be a whole meal. However, it’s more common to see small portions of it used as a side.

They go great with tacos, especially my Carne Asada Tacos. Cheesy Beef Taquitos and Air Fryer Chicken Taquitos are great options too. Basically anything that isn’t as saucy will do because the beans are already quite soupy.

These beans also go along great with Carne Asada, Chile Rellenos in Cream Sauce and Sheet Pan Chicken Fajitas! With a bit of Mexican rice and guacamole, frijoles charros are the perfect starter to a great meal.

How to Store & Reheat Leftovers

Refrigerate any cooled leftovers in an airtight container for up to 5 days. To heat them, pop them in the microwave for up to a minute or until warm. You can also heat them in a pot over medium-low heat for 3-4 minutes or until hot.

Can I Freeze These?

Yes! Frijoles charros freeze very well. Transfer them to a freezer-friendly bag or container and freeze for up to 3 months. Thaw them in the refrigerator overnight the day before you’re ready to eat them.