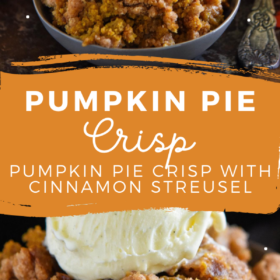 This Pumpkin Crisp is an easy fall dessert made with a creamy pumpkin pie filling and a crunchy golden cinnamon streusel and then served warm with ice cream!

If you don’t have pumpkin pie spice (affiliate link) on hand, you can also season it up with some cinnamon, nutmeg and cloves.

Here’s an easy recipe for making your own DIY Pumpkin Pie Spice!

On top of that pumpkin pie filling, we sprinkle on a ton of delicious cinnamon streusel topping. It’s a homemade streusel topping, but don’t let that scare you, it’s a breeze to make if you haven’t made one before!

You will need the follow ingredients to make the cinnamon streusel:

We mix all of the ingredients together till a crumble texture forms. You can use a fork to do this or I like to use my handy dandy hand mixer (affiliate link). Whipping up a streusel topping is extra easy with a hand mixer and requires little effort from me!

This is my favorite streusel topping and I also used it on my favorite Pumpkin Streusel Muffins and Pumpkin Sour Cream Coffee Cake this year!

This Pumpkin Pie Crisp is best served warm with ice cream or whipped cream! I personally love it best with a scoop of ice cream on top like any other classic fruit crisp.

However, if you are a big time pecan fan, they would be a wonderful addition to this Pumpkin Pie Crisp recipe. I think they would be best mixed in with the streusel on top to add some extra crunch. Just make sure and do small chopped up pecans, not large pieces.

You can prep this Pumpkin Pie Crisp ahead, but I highly recommenced baking it fresh when you are ready to serve it.

To prep this recipe ahead, I follow all directions until the baking step. Then, instead of popping it into the oven, I cover it with saran wrap or foil and pop it into the fridge.

Then, when I am ready to bake it, I take it out of the fridge and sett it on the counter and then start pre-heating the oven and bake it as directed in the recipe!

This Pumpkin Crisp is delicious served all on it’s own, but it becomes extra magical when topped with a big scoop of ice cream.

I went classic with a big scoop of creamy vanilla ice cream, but I also think cinnamon ice cream would be a great pairing.

Head on over to Dixie Crystals for the full recipe I developed for them by clicking the recipe button below.