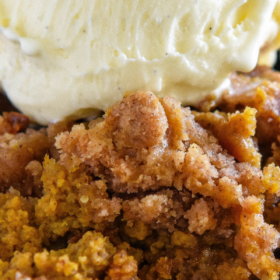 This Pumpkin Crisp is an easy fall dessert made with a creamy pumpkin pie filling and a golden cinnamon streusel and then served warm with ice cream!

*This recipe is sponsored by Dixie Crystals. Thank you for supporting the brands that make this site possible!*

How To Make Pumpkin Crisp

First we whip together a quick and easy pumpkin pie filling and then we sprinkle on a ton of delicious cinnamon streusel topping. Let’s get started.

This Pumpkin Crisp is best served warm with ice cream or whipped cream! I personally love it best with a scoop of ice cream on top like any other classic fruit crisp.

However, if you are a big time pecan fan, they would be a wonderful addition to this Pumpkin Crisp recipe. I think they would be best mixed in with the streusel on top to add some extra crunch. Just make sure and do small chopped up pecans, not large pieces.

Yes! Absolutely! I do it every thanksgiving! You can prep this Pumpkin Crisp ahead, but I highly recommenced baking it fresh when you are ready to serve it.

To prep this recipe ahead, I follow all directions until the step where you pour the cinnamon streusel topping over the pumpkin pie layer. Instead, tightly cover the pumpkin pie layer in the baking pan and refrigerate it. Then place the streusel topping in a airtight container and refrigerate it as well. You can store these two like this for up to 48 hours.

Then, when I am ready to bake it, I take it out of the fridge and set it on the counter and then start pre-heating the oven. Once the oven is warm, sprinkle the cinnamon streusel on top of the pumpkin pie layer and bake it as directed in the recipe!

Do I have to use a cast iron skillet?

No! You can use any baking dish! I recommend either a large 12-inch round casserole dish or a 9×9 baking dish. If you are giving this away to friends/family, you can also bake it in an aluminum foil tin.

How To Store Leftovers

If you have any leftovers that is! We almost never do!! Store leftovers in the fridge for up to 5 days and reheat in the microwave for about 20 seconds, until warmed through again. You can also enjoy it cold!