Pin It!
Save
SUBSCRIBE
Save Recipes Shop
Save Your Favorites!
The Novice Chef » Recipes » Desserts » Brownies » Fudge Brownies
Jump to Recipe 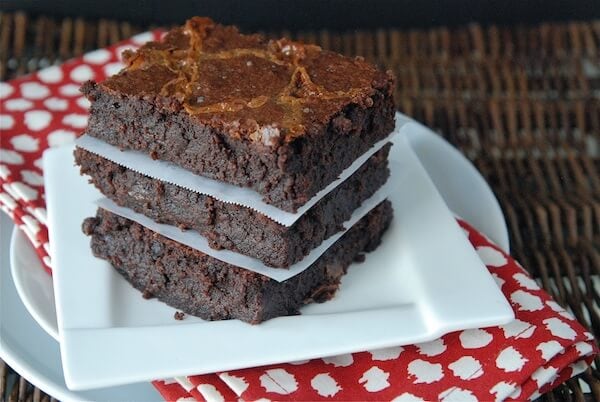 I am a boxed brownie girl. Ya I said it. And I am totally not ashamed. I may give you the side eye when you pass me a piece of cake that came out of a box…but brownies? I get it. Any brownie I have ever made from scratch has not tasted any better than the boxed brownies.

So why am I bringing you a recipe for brownies that don’t come out of a box? Because I broke down. It only took three little words…Sweet & Salty Brownies. But instead of posting the recipe as they were originally written, I am bringing it to you the lazy girl way. One bowl, prepackaged dulce de leche, and a break for wine. 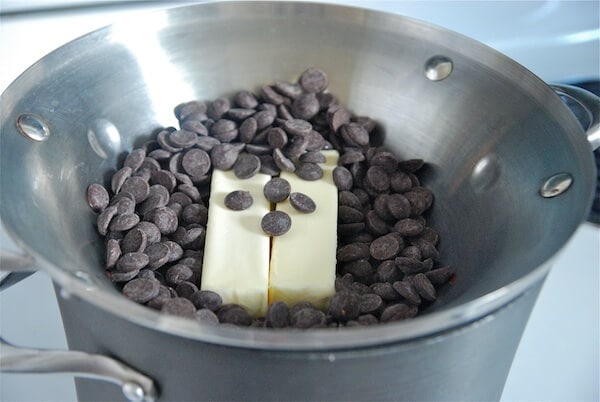 Ok, so first you need a double boiler. What?? You don’t have one?

Fine, get a metal/glass bowl and put it over a pot with some water in it. Ya it works exactly the same. Except you don’t get to have a pretty shiny double boiler that fits perfectly.

Get the water boiling, then add two sticks of room temperature butter and an 11.5 oz bag of Ghirardelli’s bittersweet chocolate baking chips.

What’s that? You are too impatient to let the butter get room temp? It’s cool, just toss it in cold. It’s just gonna take longer to melt.

Stir the chocolate and butter around until it melts completely.

P.S Go take your 5 eggs out of the fridge now. Crack them into a small bowl and let them come to room temperature while you go on with the rest of the steps. Yes, I know I just told you the room temp thing didn’t matter. But that was butter and now we are talking about eggs. 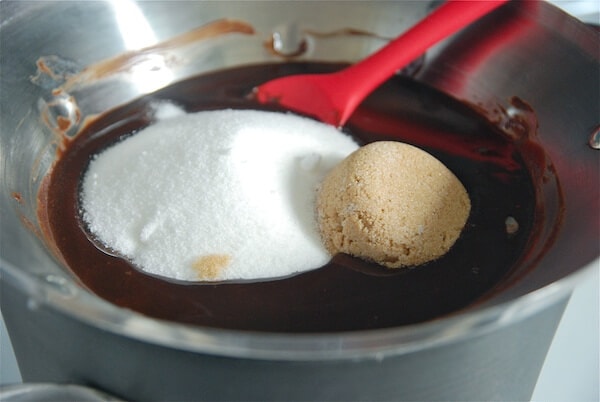 Turn off the heat, but leave the chocolate/butter mixture on top of the boiler. 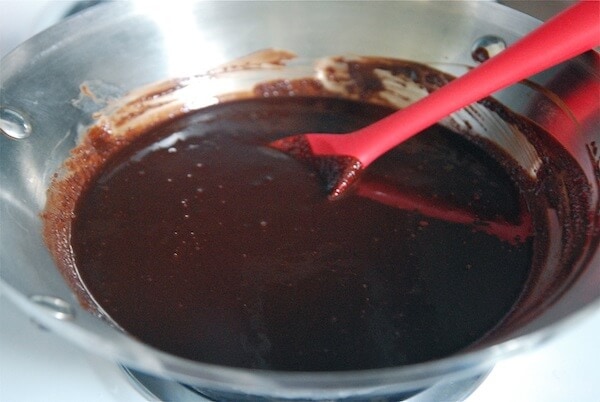 Here comes that wine break I told you about.

Once it’s whisked and pretty and smooth….let it sit until it comes to room temperature, about 30 minutes.

During this time, I suggest you play a fun game called How Much Wine Can I Drink In 30 Minutes. 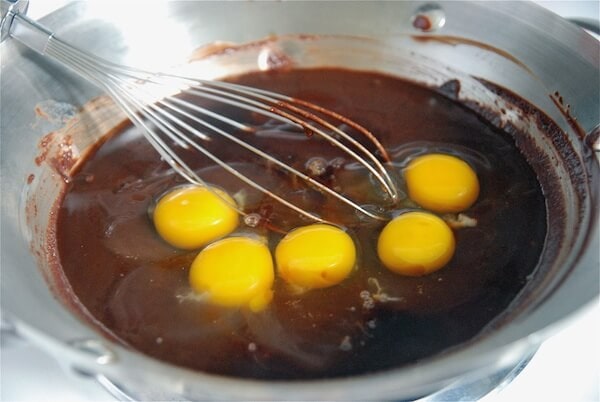 You made it back? You must not be as skilled in How Much Wine Can I Drink In 30 Minutes as I am. We can work on that next week in my next How-To post, but for now lets get back to the task at hand.

Before you do anything else, start preheating your oven to 350 degrees. The next parts go fast.

Add all 5 room temperature eggs and 2 teaspoonfuls of vanilla extract. Whisk until just combined. You don’t want to whisk too much because that could harm your drinking hand…or worse, whip the eggs so much that they ruin your brownies.

The original recipe wanted us to do the eggs separately. But this is the lazy girl’s way, it won’t really make any difference, and I know you have had too much wine by now to count and whisk 5 separate times. So just make it easier on all of us and whisk all the eggs and vanilla at once. 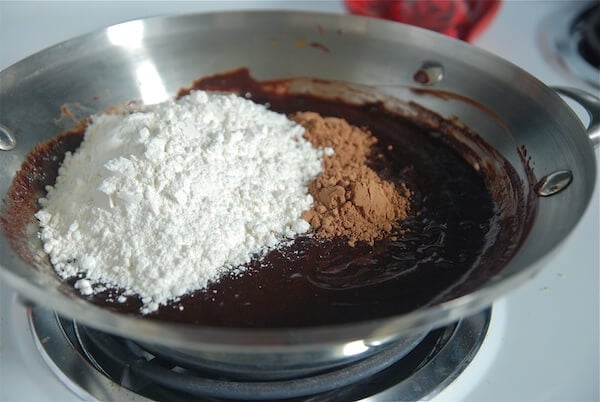 Should you mix these dry ingredients in a seperate bowl first? Probably, but I never do…that’s just one more bowl to wash. Just make sure you whisk carefully and don’t get any big lumps.

Don’t overmix for fear of splattering chocolate everywhere, and that stupid over beaten egg issue from earlier. 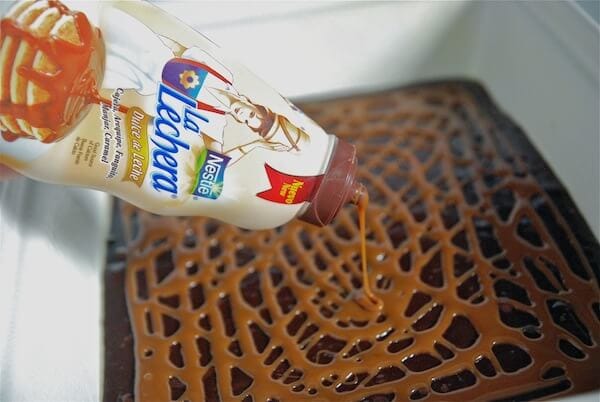 Once it’s mixed, pour half of the batter into a prepared baking pan.

Grab a squeeze bottle of Dulce De Leche and make a pretty design adding as little, or as much, as you want (and by “as much as you want” I mean like no more than 3/4 of a cup…we don’t want brownie soup). Don’t get too close to the edges with the Dulce De Leche, leave about an inch around the edges. 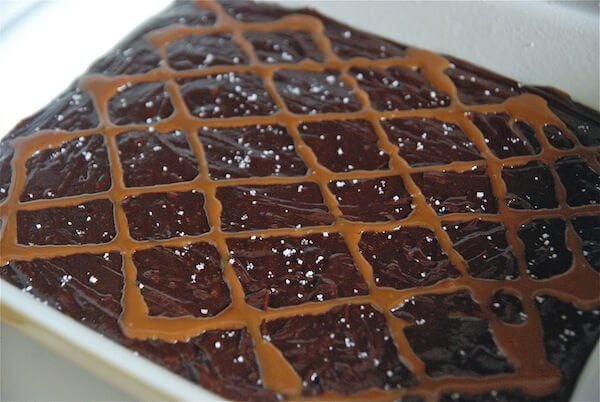 Then pour the remaining brownie batter around on top of the pretty design you just made. Level it out (carefully, so you don’t mess up the layer underneath) with a spatula, or your fingers. Whichever is easiest.

Make one more pretty design with dulce de leche. Or instead of a design, write your name so everyone knows these brownies belong to you. Sprinkle on some Fluer De Sel (i.e. fancy flaky sea salt you can buy at Whole Foods or Fresh Market).

Pop them in the oven (preheated to 350 degrees) for 30-35 minutes, rotating half way through.

Let them cool so you don’t burn off your taste buds, and because they taste much better room temperature, then dig in! 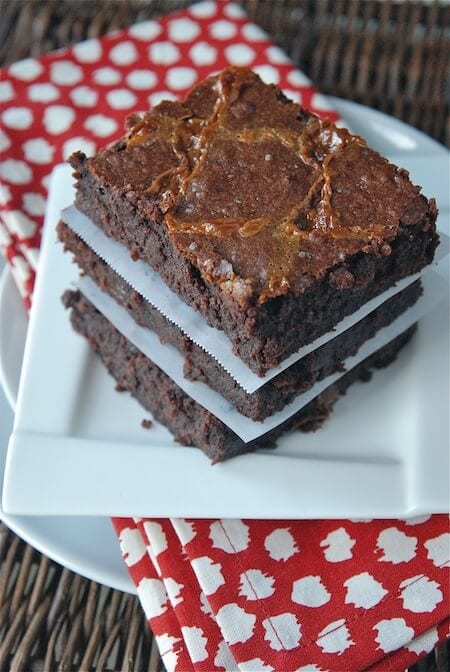