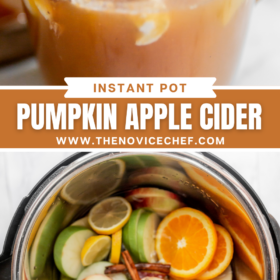 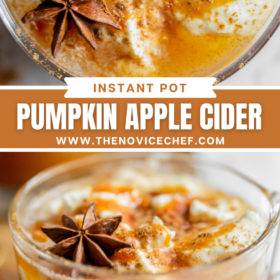 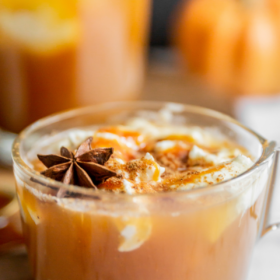 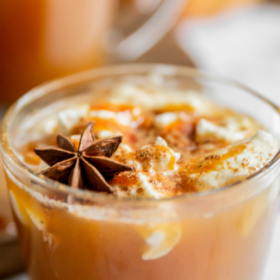 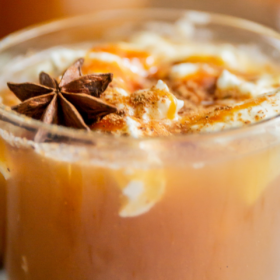 When it comes to classic fall drink recipes, there’s none more classic than apple cider. Yes there’s pumpkin spice lattes, and those are a close second, but, in my mind, homemade apple cider wins the unofficial contest.

That said, I decided traditional apple cider just wasn’t going to cut it this year. So that’s why I’m introducing you to Instant Pot Pumpkin Apple Cider today! It’s every bit as homey and comforting as the original version is, but the flavors are over-the-top delicious… in the best way possible!

Apple, orange, and lemon slices combine with cinnamon sticks, pumpkin puree, and maple syrup for the most flavorful homemade apple cider ever. I know that’s quite the declaration, but I also know that this cider is going to live up to the hype.

So, make it in the crockpot, make in the instant pot, add some extra maple syrup, serve it hot, serve it cold… just don’t miss out!

Let’s get started on this sweet apple cider! Here’s what we’ll need to round up before we begin:

How to Make Pumpkin Apple Cider

Pumpkin apple cider is super easy to make, but it comes out looking picturesque and elegant. It takes about 10 minutes to prep, which mostly consists of chopping up fruit. Then you’ll cook the cider in the instant pot, strain it, wait for it to cool, and at that point, you’re done! Simple.

Place the Ingredients in the Instant Pot: Add the cut fruits, water, cinnamon, star anise and vanilla extract to the instant pot or pressure cooker. Cook on high pressure for 15 minutes.

Let the Cider Cool: Once finished, do a natural release for 10 minutes, then quick release the remaining pressure. Remove the lid and allow the cider to cool completely.

Strain the Cider: Once cool, use a colander and cheesecloth to strain the apple cider and squeeze out all of the juice from the fruits. Discard the fruits when you’re finished.

Add the Maple Syrup: Also add the pumpkin puree and the pumpkin spice to the apple cider, and mix well until everything is combined. Serve your cider warm or chilled, and enjoy!

Don’t have an instant pot? No worries! You can also use your crockpot. Pumpkin apple cider can be made in more than one way!

Instead of using an instant pot, you can cook your apple cider on low for 8 hours, or on high for 5 hours, in a crockpot. It tastes delicious either way, so feel free to pick your favorite method!

This cider would be perfect for fall get-togethers, Oktoberfests, and maybe even Thanksgiving! Just something to think about as you read over these quick tips 🙂 :

You can totally drink this apple cider as-is. But… if you’re looking for add-ons and enhancements, I’ve got you covered. Feel free to top your warm apple cider with whipped cream, cinnamon, or a caramel drizzle! Or all three at once, if you feel that that’s necessary, like I do!

If you like to drink your cider cold, try garnishing your glass with apple/orange slices, or other fruit. Enjoy!

How to Store Homemade Cider

Store any leftover pumpkin apple cider in an airtight container with a tight-fitting lid, for up to a week. To reheat, simply microwave yourself a glass, or heat your cider up on the stovetop in a saucepan – low heat is best so that you don’t accidentally boil it.

Sure. Make sure your apple cider has cooled completely before freezing it, though. Pour it into an airtight container, leaving some space at the top so it can expand when it freezes, and freeze for 1-2 months. Let it defrost in the refrigerator overnight before drinking/reheating again.

Looking for more Fall recipes to serve your guests that feature the seasons favorite apples and/or pumpkins? Try out one of these reader favorite recipes!