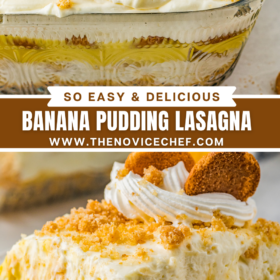 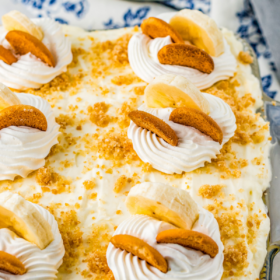 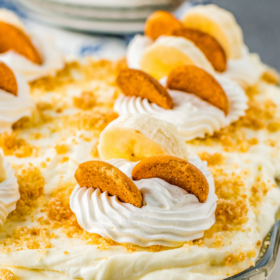 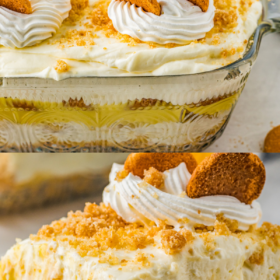 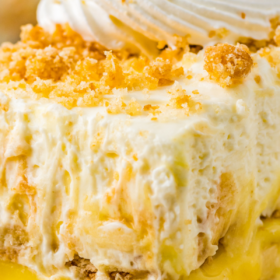 As far as baking goes, my motto is: everything’s better with cheesecake. Okay, maybe that’s not true all the time, but it’s true a lot of the time! And this lush banana pudding recipe is a perfect example of how cheesecake can add an extra-special touch to other great desserts.

If you’ve never tried banana pudding before, it’s a sweet, trifle-like dessert that’s very popular in the South. Made with layers of sliced banana, vanilla pudding, and crisp vanilla cookies. Whipped cream usually tops it off, and the entire dessert is served cold, often at potluck dinners. There are also baked banana puddings made with homemade custard and meringue instead of the pudding and whipped cream – sometimes this version is served warm.

I’m going with a cold banana pudding in this recipe, using regular vanilla pudding from a mix. It makes the recipe super simple, and ultra-creamy. To make this a banana pudding lasagna, we’ll be adding a lovely layer of sweetened, whipped cream cheese.

For the Cream Cheese LayeR

For the Banana Pudding Layer

What Can I Use Instead of Vanilla Wafers in Banana Pudding?

The popular vanilla cookies known as “Nilla Wafers” are standard in Southern banana pudding recipes, but you can definitely change it up if you want to! Other good options include shortbread cookies, Pepperidge Farm Chessmen cookies, or graham crackers.

How to Make It, Step by Step

Let’s go over the method for making and assembling this creamy, dreamy banana pudding lasagna. It’s actually really simple, and fun, too.

Why Do My Bananas Turn Black in Banana Pudding?

What else should you know about making this easy dish? Well, I do have some helpful hints to share! These tips will help you make sure your banana pudding lasagna turns out lush and luscious.

As amazing as this recipe is, it’s also a great canvas for adding extra tastes and textures! Here are just a few ways you can customize it:

This dessert needs to be refrigerated, to keep it fresh and food-safe. Store it in an airtight container, or just cover the dish tightly with plastic wrap. It will keep in the fridge for up to 5 days.

I actually don’t recommend freezing this recipe – unfortunately, the bananas tend to turn brown and watery when frozen and thawed out, and some of the creamy ingredients may turn grainy.

For the Cream Cheese Layer

For the Banana Pudding Layer

Looking for more easy no-bake recipes? ME TOO! They are my go to here in Florida during the hotter months, when the temps are reaching 100°F, and I don’t want to turn on my oven. Here are some of my other favorites: