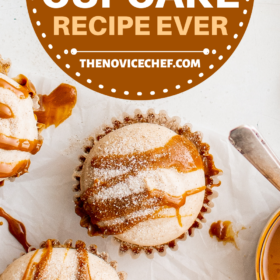 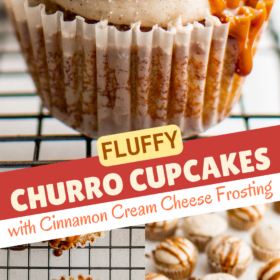 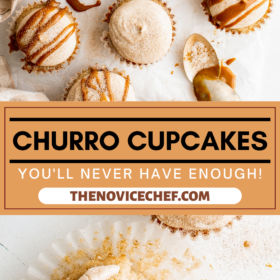 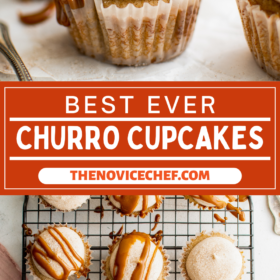 Churro Cupcakes with cinnamon cream cheese frosting are the perfect after-dinner dessert to go with a cup of coffee. The cupcake is light and fluffy, while the frosting is smooth, indulgent, and ultra-creamy, spiked with a little bit of cinnamon.

I first came up with these cupcakes on a weekend when we were having some family over for a late lunch, and I thought that a combination of churros and cupcakes would make the perfect treat. I would only have needed to make one batch, but then Jorge asked me to double the recipe so he could bring some in to work on Monday. All of this is leading up to telling you that on that Sunday, I had 36 cupcakes staring me in the face. It was horrible, it was glorious, and it was the best Sunday I’d had in a long time.

Why? Because these cupcakes were completely delicious! The cake was the perfect base for the cinnamon cream cheese frosting on top. They were perfectly light, while still staying moist. I added oil, alongside the butter, to get this consistency. Since the frosting was going to be on the rich side, the cupcake itself could not be too heavy…but I also did not want too light (or dry) of a cupcake. These were perfect with a cup of coffee . I am sure they will be showing up again soon!

You might be wondering what is special about a churro cupcake – what is a churro, anyway, and what do they taste like? Well, churros are traditional Spanish and South American snacks, flavored mostly with cinnamon. The base is fried dough, making these crispy-chewy-soft little snacks similar to a cinnamon doughnut, but less bready. They’re often served with caramel sauce, which is completely off-the-charts delicious, of course.

I wanted to re-create that feeling of lightness, almost like choux pastry, with a great cinnamon flavor and the same richness you get from the caramel. All of this, in cupcake form. What could be better? And frosting-wise, cream cheese just seemed like the yummiest option! (Want more churro goodness? Check ou these Churro Pancakes, Churro Twists, and classic Churros with Salted Caramel Sauce! For a little hint of fall, you need these addictive Pumpkin Churros.)

The proportions for these cupcakes are similar to most cupcake recipes: one part butter, two parts sugar, three parts flour. In place of the traditional four eggs, we’re going with just two eggs, plus some vegetable oil and milk for extra moisture and lightness. Here’s the full list:

The steps for baking cupcakes are fairly simple – it’s mostly a mix-and-bake recipe. Keep in mind that cupcakes tend to bake up faster than a regular cake or cake layers, so you’ll only need to keep them in the oven about 15 minutes.

Prep the Oven and Muffin Tin. To start, set your oven to preheat to 350°F. While it preheats, line your muffin pan with cupcake liners and set it aside while you make the batter.

Combine the Dry Ingredients. Next, dump the flour, cinnamon, baking powder, and salt into a medium mixing bowl. Give the ingredients a quick whisk to combine, and set them aside, too.

Combine the Wet Ingredients, Except Milk. In a large bowl, cream the butter and sugar together until light and fluffy. You can use a hand mixer or stand mixer to do this. Add the eggs to the creamed butter and sugar, one at a time, until just combined. Finally, beat in the vanilla and the oil.

Add the Dry Ingredients and Milk in Stages. Sprinkle 1/3 of the flour mixture over the wet ingredients, and gently stir the batter by hand until barely combined. Add half of the milk, and stir again until just combined. Repeat these steps with the remaining flour mixture and milk, ending with the flour. Be careful not to overmix the batter, or the cupcakes won’t be tender and light!

Bake. Fill each cupcake liner with about 2 tablespoons of batter (filled halfway up). Bake the cupcakes for 14 to 16 minutes, or until a toothpick inserted in the center comes out with one or two crumbs clinging to it. Take the cupcakes out of the oven, and set them aside to cool completely before you frost them.

Make the Frosting. While the cupcakes cool, you can make the cinnamon cream cheese frosting. Cream the butter and cream cheese together in a large, clean bowl, using clean, dry beaters. Add the sugar a cup at a time, beating well between each cup. Stir in the cinnamon, and then stir in the vanilla. Beat the frosting again until it’s light and fluffy.

Decorate. Once the cupcakes are completely cool, pipe the frosting onto the cupcakes. You can also decorate with cinnamon sugar, dulce de leche, etc.

Tips for the Best Churro Cupcakes

To make the cupcakes:

To make the frosting:

Recipe Note: When it says to only fill your cupcake tins half way, I mean it. These cupcakes do not make a dome on top. Instead they are flat. If they rise over the tin, they are not pretty!