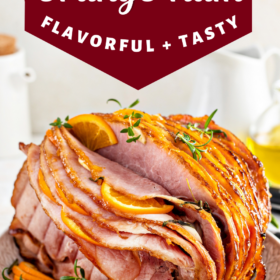 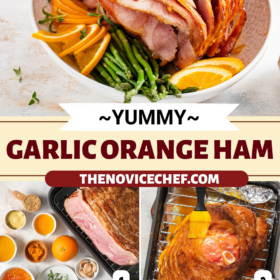 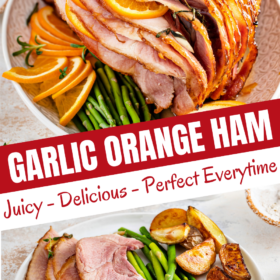 Baked Ham with Orange Ham Glaze will be the star of your holiday table! Stuffed with fresh oranges, garlic, and herbs, and slowly baked, to infuse all the flavors.

There’s nothing quite like a Christmas ham, glazed with something sweet and sticky, and making the whole house smell like the holidays. It’s a festive main course, for sure – and ham is so easy to make! Creating a showstopper is as easy as opening the ham, whipping up some glaze, and throwing it all in the oven. If you are looking for a great Christmas dinner option that’s less fuss than turkey or roast beef, ham is definitely a great choice.

For this recipe, classic glaze ingredients like brown sugar and Dijon mustard are elevated with the addition of orange marmalade, fresh herbs, garlic, and real orange slices. The result? A ham that’s just as beautiful to look at as it is to eat.

(If you want to see more ham ideas, be sure to check out these recipes for Crockpot Ham, Pear Glazed Ham, and Air Fryer Ham!)

Let’s talk ingredients. These are the items you’ll need to create this yuletide dinner. Each one is a flavor powerhouse!

What Are the Different Cuts of Ham?

The main cuts of ham you’ll be looking at for this recipe are smoked or cured half hams, which are sold as one of two cuts: shank, and butt. When you go to the grocery store and look at a display of hams around Christmas and Easter, these are the types of ham you almost always see. These hams may be spiral sliced or not, and although they are fully cooked, they are usually baked before serving.

Other types of ham, such as country ham (which is dry-cured and very salty; it should be soaked before cooking) and Black Forest ham (a specialty from Germany) are great for other purposes, but aren’t usually baked for Christmas dinner.

For this recipe, I recommend using a spiral-sliced ham, so that you can tuck the orange slices and herbs right in between the slices.

How to Make Baked Ham with A Garlic-Orange Ham Glaze

This recipe is guaranteed to be one of the easiest on your holiday list. The oven does almost all of the work – all you have to do is prep the ham, time it, and baste it. And since it’s spiral-sliced, serving is a breeze!

How Long Does It Take to Cook a Ham in the Oven?

Your ham may be larger or smaller than 10 pounds, so it is helpful to know how long to cook a spiral ham per pound. Fully cooked spiral-sliced ham needs to be warmed up until the internal temperature reaches 140°F.  This takes about 10 to 15 minutes per pound in a 325°F oven.

Do You Cover a Ham when You Bake It in the Oven?

I think baked ham turns out the best when you cover it part of the time. Covering it during the first part of baking helps keep the ham juicy, and uncovering it for the last part of the baking time allows the ham and glaze to brown and sizzle a little bit – yum.

I hope you’re feeling inspired to try this bold, sweet, mouthwatering baked ham recipe. It might just become a holiday tradition! And these tips will help ensure the tastiest result.

This ham is wonderful with all of your favorite Christmas side dishes. These easy recipes are some of our favorite dishes to make for a festive dinner.

How to Store and Reheat the Leftovers

Leftover ham can be covered with foil and stored in your fridge. It will keep for 3 to 5 days. You can reheat slices of ham in the microwave, a skillet, or the oven.

Can I Freeze Baked Ham?

Sure! Take the ham off of the bone, and pack it into freezer bags. Mark with the date, and store in your freezer for 1 to 2 months. Thaw in the refrigerator before reheating.